(As Appeared in American City & Country)

Salisbury, MD has joined a widespread effort to transform an ecological hazard – sludge – into a useful product through land application.

The story that has led Salisbury to this stage begins in the early ‘80’s, when the city was dumping about 6 million gallons of municipal, anaerobically digested sludge each year in a pit-like spoil site created by dredging the Wicomico River. Realizing this disposal posed a potential threat to the area’s groundwater, the Maryland Department of Environment discontinued the city’s permit in 1986 and ordered a phase-out. 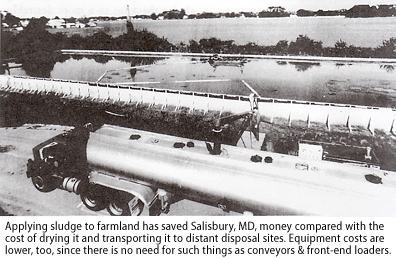 Fortunately, in anticipation of this change, the city had recently begun an authorized, experimental program for farmland application of anaerobically digested liquid sewage sludge. Upgrades in the city’s treatment plant to improve wastewater quality had also been completed in conjunction with this program.

The plant’s digestion process and pretreatment monitoring program significantly removed pathogens and limited heavy metals, leaving an end product that was Class 1 sludge as designated by the state- safe for application on farmland.

(During this transitional period, an early plan to dispose of sludge through composting proved to be cost-prohibitive and was thus abandoned.)

So, faced with a fast-approaching shutdown date, the city decided to stick with the land application program newly underway, an option that would also provide a service to surrounding farming communities.

The city also had to deal with a sludge overload problem that occasionally forced it to truck excess waste at a high cost to other treatment plants in the vicinity.

A third, 1.9 million-gallon tank since been installed as part of a new system for treating Wicomico County’s septage. The facility’s lime stabilization process raises septage pH and removes pathogens to the level of Class 1 sludge.

The two treatment processes at work, anaerobic digestion for the city’s septage and lime stabilization for the county’s, require separate sites and farmland applications techniques.

Fresh sludge undergoes its normal settling process after introduction into the storage tanks. Through dynamic cycling, water rises to the top and serves as a buffer for odor control.

Farmers were invited to cooperate in a research program to develop scientifically based application rates specific to local agricultural conditions. Tank trucks now haul treated sludge to the fields according to agricultural cycles. At least five months’ worth of available sludge is held in the tanks for precisely timed delivery to the grain and pasture grass fields, which are harvested solely for animal feed.

The plant’s dredging system transfers sludge from the tank bottoms to trucks. Initially, operators drained the sludge in the smaller tank by gravity feed through lines set in three sump connections. But after an initial outflow of water, the residual sludge tended to thicken and settle and could be removed only by vacuum suction equipment.

Automatic dredges, supplied by Crisafulli Pump, Glendive, Mont., provided a more cost-effective way to draw off the sludge. Activated by cable winches, the dredges move back and forth across tank bottoms, allowing the settled sludge to be pumped directly into the trucks.

Separated water can by easily decanted off the top of the tank and recirculated through the wastewater treatment process. The remaining sludge thickens to a more desirable consistency for field use. Less water is trucked, and land application rates are more consistent.

The land application option has been a good one so far, costing both the city and county substantially less than would drying and transporting it to distant disposal sites.

The program is also designed to investigate how ground and surface waters respond to the application of treated sludge, and to monitor crop yields. Since the program’s inception, farmers have been steadily signing up on a free and voluntary basis.