By Reed Margulis (As Appeared in Environmental Protection)

The galvanized steel components for two 10,000 gallon tanks for storing fuel oil and hydraulic fluid were assembled in a cramped underground chamber after being lowered 2,500 feet down in a salt mine elevator. Taking to the air, a similar package of aluminum tank parts was dropped by helicopter onto an Alaskan pipeline site.

With much the same dexterity, a one-million gallon tank was configured from uniformly prefabricated parts into an L-shaped facility to conform to an irregular area.

What’s more, all stock parts for six one-million gallon tanks were rushed from inventory to a wastewater project in several weeks, each of which was site-assembled by eight workmen and were operational in four days.

While these typical case histories seem to have little in common, they are linked by a technology only three decades young: genuine modularity combining the advantages of standardization with those of fast and simple bolt-together assembly and minimal site preparation. Panels, supports and rails might vary somewhat in size depending on the model, but tanks of this type normally deliver price/performance advantages over conventional counterparts no matter what their forms or functions. The promise: more storage for the money, all the more true for customized installations.

Squaring the Circle
Although modularity can be built to a lesser degree into round tanks, the engineering is more fully expressed in square and rectangular systems. These could assume almost any right-angle shape and range in capacities from 500 to two-million gallons or more. For example, the standard components comprising the modular tank could be organized into a T, X, U, L or even a simulated S configuration. Field installation is completed under little supervision by work crews employing ordinary hand tools without resort to heavy moving or lifting equipment. 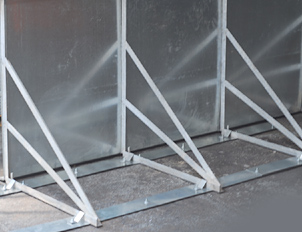 One reason for their relative economy is inherent in the height of wall panels which ranges only up to about six feet. Tall round tanks must contain the stress of high columns of liquid within heavy gauge, costly steel structures. On the other hand, considerably thinner gauge steel is needed for comparable volumes in low-profile rectilinear modular designs. Cost savings are also generated on shipment since panels, frames and support rails packed flat on skids are classified as knocked-down steel freight. Accordingly, all components for a two-million gallon tank and liner would ride on a single flat bed truck at the relatively low prevailing rate.

In addition, massive foundations to support the loads of towering tanks and their contents are not necessary, and far fewer bolts are required. However, if space is at a premium, the modular tank’s larger footprint might make a round tank the only viable choice. Depending on the application, a round tank might also be considered more suitable for permanent containment, although modular tanks provide both that and short-term storage.

Rental plans are generally available for modular tanks in temporary service. A related advantage is structural–their free-standing design. With little or no groundwork needed to level a base on which to settle the tank, the weight of whose contents is widely and evenly dispersed, the underlying terrain is minimally disturbed. In addition, at the rental’s conclusion, modular systems can be disassembled as easily as they are erected for reshipment to the manufacturer. On return, the components, minus the liner, are refurbished for reuse in the spirit of environmental recycling.

Pronounced flexibility
Several other user benefits include emergency containment readily at hand in compact standby storage, as well as portable tanks that can migrate from site to site. Such was the case with a relocatable and reconfigurable 300,000 gallon facility employed at a Superfund project; it was later expanded to 500,000 gallons and shipped with the additional components and an upsized liner to a distant, out-of-state work location. If the original 300,000 gallon tank was otherwise dismantled and stored on four 4 foot x 5 foot pallets, its parts would fit comfortably in an 8 foot x 10 foot space.

Modularity also means accessibility: tanks designed to go everywhere and fit anywhere, indoors or out. Hand-carried through doorways, hatches or windows, modular components bolt together rapidly in hard-to-reach locations like basements, tunnels, upper floors, laboratories, rooftops and utility areas. A modular tank is obviously preferable to breaking through walls to retrofit a plant interior with a pre-welded unit for additional storage capacity.

Modular containment ranging from 300,000 to 400,000 gallons is cost competitive with ponds and berms, when factoring in the cost of liners and excavation. Equally, the system lowers the price of short-term liquid transfer and storage during pond closures. Similarly, aboveground modular systems could be the only practical solutions to excavating ponds in rocky or frozen soils, or in sites with high water tables.

All in the family
Secondary containment is another example of how modular tanks are being used. For example, Frac tanks of approximately 20,000 gallon capacity are being widely deployed for temporary remediation storage. Current regulations frequently mandate secondary containment for these facilities, most often consisting of berms with liners or concrete basins. However, modular tanks are reasonably price competitive with berms and considerably more economical than concrete structures, when labor costs are computed in. Seismic 4 designs for earthquake zones can also be manufactured in capacity ranges of over one-million gallons. Among principal buyers accepting heavy duty modular systems are hazardous waste companies, sewage and wastewater treatment plants, chemical processing industries, governmental agencies, municipal utilities and public authorities. They have been introduced in every state in the U.S. as well as overseas. Realistically speaking, modular tanks seldom compete directly with traditional storage systems, but rather share an alternative partnership with them as specialized problem solvers. In this relationship, modular technology continues to gain ground, promoting versatility and economy as chief strengths of the concept.

Reed Margulis received his degree in mechanical engineering from M.I.T., and a Masters Degree from Harvard Business School. He is president of ModuTank Inc. and has had previous engineering and management experience with such organizations as Hughes, IBM, Envirotech, and Elf Aquitaine.